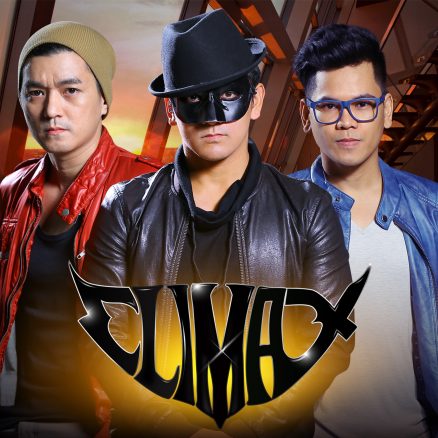 Here we thought, we’d heard and seen it all. This one band shatters that misconception. Enter the mysterious rock and pop band known as Climax. Why mysterious?  It’s because no one outside of the band knows who the singer is, and what he looks like. The singer is wearing a mask that conceals his features. He actually looks like the Green Hornet except that he usually wears a blue, tight-fitting shirt. He’s got his Fedora hat on and every now and then wears a suit. But while all those who watch him from the side of the audience wonder how he really looks, the bigger draw for them is how distinct his voice is.  Some people say he sounds like Adam Levine in that nasally, falsetto tone. But we’re thinking his vocal range is wide. That’s why he can practically sing whatever it is that he wants to and do a good job of it. From rock to pop and anything else in between, this singer’s voice can hit it. And with a tight, muscular rhythm section behind him, they could do no wrong.

And behold, not only do they play their mysterious cards right, they’re also into their own advocacy. The band Climax founded their own charitable group Musikaramay, a non-profit organization whose only purpose is to earn money and give it to the less fortunate. Climax regularly performs busker style on street corners, parks and under bridges for free (despite being a solid staple in the live bar circuit).  This is where they give it back. Whatever they earn they give out to charity. Their average is 15-20 thousand pesos for playing three hours straight for passersby and for the locals. Their biggest so far is when they raised one hundred and fifty thousand pesos for the storm victims in Tacloban.

Asked why they do it, the masked Max Guerrero says “We build lives through street music.” “When people ask me why I wear a mask, I jokingly answer: because I’m a real-life superhero.” Drummer Stanley Seludo adds, “in small ways, we can make a big difference in other people’s lives.”  Climax also includes Oman Peradilla on bass and afro-haired guitarist Kem Alia. “The money also goes to ‘Alagang Kapatid Foundation, and sometimes to the National Children’s Hospital.”