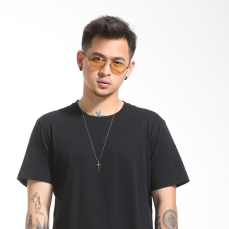 Geo Ong is a Palawan-based rapper. Early this year, he hit it big with “Parokyana” which to date has 15 Million views on YouTube, likewise “Breadwinner” also struck a chord with more than a million listeners. Now Comes “Pekeng Kaibigan” whichis the #1 trending video on YouTube and has already garnered over 3 Million views since its release last August 16. Check out the music video link below and see what the fuss is all about this lyrical/visceral wordsmith.

Geo Ong’s viral hit is a slow burn rap number entitled “Pekeng Kaibigan.” This track is a searing description about fake people and the most lecherous of its kind – those that call themselves friends. We all know the type, but Geo Ong seems to have a better handle of these unwanted types. At least that’s how we hear it as Geo Ong brutally dissects them amidst the trance-like beats of this track.  What we like about Geo Ong is that he doesn’t mince his words. Brutal honesty from start to finish.