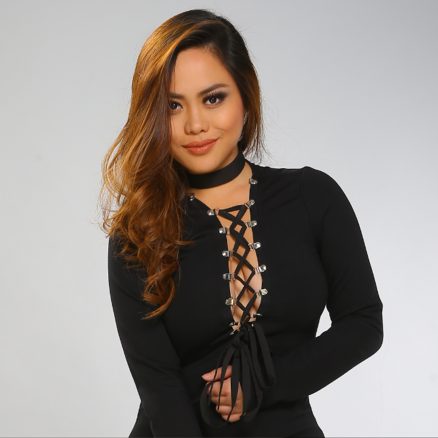 Kimverlie Soriano Molina, more commonly known as Kim Molina, is a Filipino singer and actress. She was born on July 1, 1991 and spent her childhood in Saudi Arabia. This is where she took small steps at an early age to build her career.

Kim started singing at the age of 2 and performing at the age of 5. She starred in Middle Eastern shows and was selected to represent the Middle East to the World Championships of the Performing Arts in Los Angeles, California in 2009. She also won the title of The Filipino Channel (TFC) Pop Star in ABS-CBN’s Middle East search.

In the Philippines, Kim did not stop pursuing singing and performing. She landed roles in musicals and TV shows alike. She played ‘Aileen’ in the stage musical ‘Rak of Aegis’, which was her first lead role, ‘Kelly’ on ABS-CBN’s ‘Til I met you, and ‘Joan’ in Camp Sawi.

Her role in Rak of Aegis was deemed the most memorable and impactful for Kim, musical wise, as it caused her to win ‘Best Actress in a Musical’ during ‘Gawad Buhay Awards Night’. In film, 2015 Metro Manila Film Festival entry ‘#WalangForever’ got her nominated for Best Supporting Actress.

In 2016, she debuted as a Viva Recording Artist. Her first single is “Naluluha Ako”, an emotion-filled ballad written by Vehnee Saturno. This was then followed by “Sino Ang Iibigin Ko”. Kim’s big and amazing voice won her the title ‘Senior Grand Champion Vocalist of the World’.