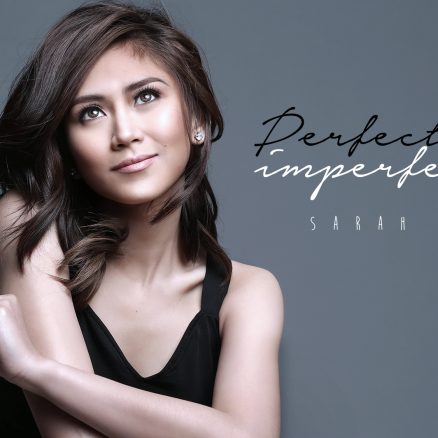 This album is now available on record stores and on Itunes

The Philippines’ very Popstar Princess is back with a new album that is vibrant and exciting! This is exactly how it sounds as Sarah Geronimo and Viva Records releases the new album entitled “Perfectly Imperfect.”

SG chooses to get behind an electronic dance music track as the lead single off the album. “Kilometro” is a hook filled mid-tempo song that embraces both R&B and pop with just the right dash of EDM to make it sizzle.

From there, it just keeps getting better. Still in R&B pop mode, SG delivers another keyboard drenched cut in “Bangon,” a track written by Thyro Alfaro (of Philpop fame) that delivers more of that “now”sound. An infectious piano lick at the start is the perfect launch pad for Sarah’s excellent singing that eventually reaches a crescendo.

Obviously, Sarah is just at the beginning of another chapter in her music career. As she rings one great song after another, she pulls another one in the huge sounding “Bangon.” Within the framework of echoing beats and tasty keyboards, she waxes a tale of hope in the face of heartbreak. It’s a strong song right from the start that just keeps rising as it goes.

Cooling down a notch, Sarah takes it easy with the acoustic sounds of “This Fight,” a light, acoustic guitar driven song written by Viva Records singer-songwriter Kito Romualdez. Then there’s “In Your Hands,” a hopeful tune that all of us could relate to. As every now and then, we all need a song of positivity to latch onto. Slow to mid-tempo ballads like “Kung Sabagay” and “Minamahal” reminds us where Sarah’s musical style came from and compared to past SG hits, these tunes could hold their own.

But the coup de grace in this set are the trio of songs helmed by Canadian music producer Adam Hurstfield. Having made music for international hit artists like Ne-Yo, Backstreet Boys, Super Junior and Def Leppard among others, Hurstfield brought a Top 40 sheen to Sarah’s sound.

With a song like “Bulletproof,” it is evident that SG’s voice is at the same world-class level as the acts that Hurstfield has worked with before. Then there’s the title track “Perfectly Imperfect,” which brings this album into perspective. It just says that our very own Popstar Princess is ready for the world stage.

All these and a bonus track in the rap-pop track “Last Days Of Our Lives” featuring North American rap artist Celeb complete SG’s latest offering. Change is inevitable goes the saying. If said change is this good, then bring it on!