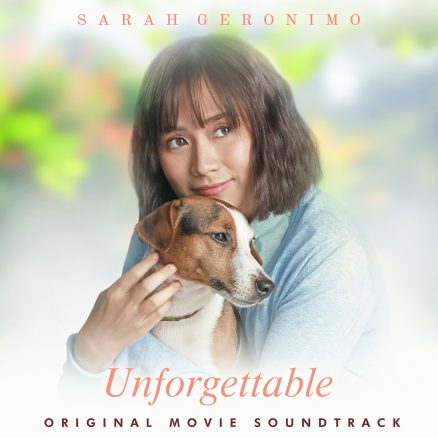 A sure-fire hit movie that’s going to hit the tills this last quarter of 2019 is the much anticipated, new Sarah Geronimo-starrer entitled “Unforgettable.”

Besides featuring the Popstar Royalty, and several veteran and upcoming actors, “Unforgettable” has Geronimo co-sharing much of her screen time with Milo the beloved Jack Russell Terrier. Mixing drama, hope and feel-good moments, the movie also features an assuredly unforgettable music repertoire in the form of its original soundtrack.

Starting with Sarah Geronimo’s much-awaited new track for 2019 which comes in the form of a beautifully rendered cover of a Rico Blanco tune entitled “Ang Tangi Kong Pangarap.” This obscure gem gets a fine retooling and who can do it best than the Popstar Royalty. Here, the song becomes a sincere and emotional reading under the deft handling of Sarah Geronimo.

Also included in the OST is Janine Tenoso revival of the much-loved hit “Shine.” Caleb Santos is playful and positive on his tuneful acoustic ditty entitled “Tinatangi.”  Jono Hilario’s Mraz-inspired acoustic-driven original “Sa Tamang Panahon” is also a worthy addition. Sarah Geronimo closes the EP compilation with an original entitled “Saglit Na Lang.” If this Thyro & Yumi composition is any indication about the upcoming movie, sobs and waterworks are in the offing that makes for an unforgettable movie, and music collection.