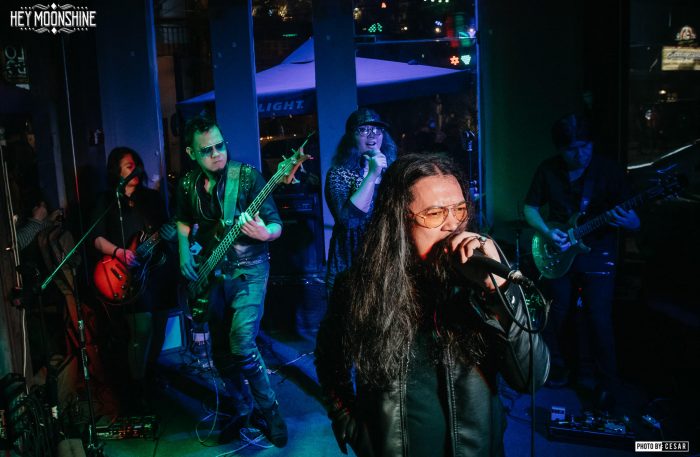 As one of the most noticeable emerging rock bands in the country, Hey Moonshine had been gaining attention not just because of their unique Southern Rock sound but also because of their amazing profile.  It’s not every day that we see a rock band composed of a lawyer, a doctor, two engineers, a chef, a teacher, a graphic artist and a video editor. Most of their songs have a common theme — peace, love and harmony.  This is the message that the band wishes to spread.

Thus, it is not surprising that Hey Moonshine’s first single under Viva Records is about achieving peace through unity.  The song is entitled We’ll Break this War.  It was written by the band’s guitarist Bryan Gatmaitan back in 2016.  Back then, there was an impending threat of nuclear war from North Korea.  And the world was in a state of panic. With the song, Hey Moonshine calls upon the people to unite to bring about peace and prevent any kind of war.  And according to the band, the song is not just about a literal war. It also encompasses all kinds of conflict, whether big or small. All of which, may be prevented by simply working together.

We’ll Break this War was launched on October 19, 2019 at Alchemy Bistro Bar in Poblacion, Makati.  At around 9:00 p.m., the place was already packed. The anticipation for Hey Moonshine’s single release can be felt in the air.  However, it was a rising pop-rock band known as Antsfly that opened the show. Their music was dominated by powerful vocals, which clearly captured the crowd.  After which, the band Whiskey Version performed on stage. Their music was definitely influenced by 60’s and 70’s rock and roll. They did a set of covers from the Beatles and other bands form that era, as well as their own original songs.

It was almost midnight when Hey Moonshine finally went on stage.  They performed their original compositions, most of which are songs about peace, love and harmony.  When they finally performed We’ll Break this War, the crowd was loudly singing along with the chorus.  “Together.  Together, we’ll break this war”.

The show ended with a wicked performance by funk rock legends Cosmic Love, who performed their timeless hits such as Funkalawakan and Beautiful Kind.

Follow Hey Moonshine in Facebook.  We’ll Break this was can be streamed in Spotify and downloaded in iTunes Music and other digital stores.