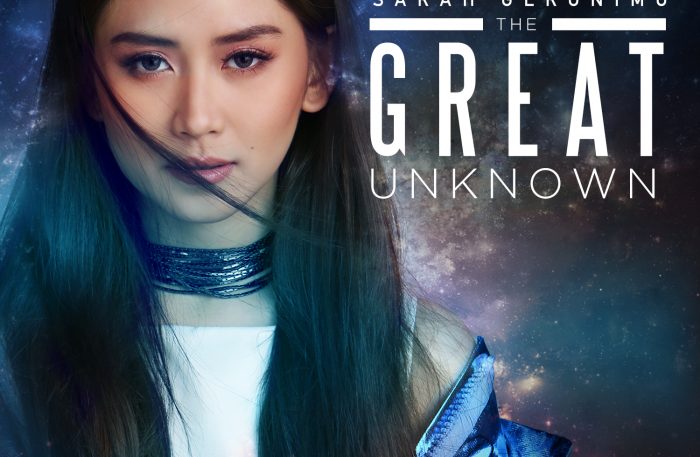 Sarah Geronimo continues with her amazing musical reinvention with the release of her twelfth and brand new album entitled “The Great Unknown,” and here, our musical Popstar Royalty takes the best bits from her two previous albums and expands on it further.

An even mix of ballads, mid tempo numbers and upbeat tracks, the album starts off with the piano driven ballad “Unbroken.” Written by Philpop 2015 finalist Melvin Morallos, “Unbroken” finds Sarah Geronimo on a romantic yet somewhat pensive mood. These strong emotions only serves to beautify the songs of course, and you can hear it on the singer’s execution all throughout, especially on “The Great Unknown,” the title track Sarah collaborated with alt-pop band Hale.

The laid back feel continues on romantic songs such as “Ako’y Para Lamang Sa’Yo,” a track composed by songwriter Top Suzara. Picking up the tempo a bit, SG takes on the R&B tinged pop number writtenby Geraldine Lim entitled, “Baby You’re The Reason.” Also making her first time inclusion in an SG album is pop-rock singer-songwriter Yeng Constantino who contributes a song and is featured on “Kaibigan Mo.”

The new album is exclusively an all-original affair, with Sarah meticulously picking the best songs from some of the most promising tunesmiths today like Thyro Alfaro, Yumi Lacsamana, Nica Del Rosario, Emmanuel Sambayan, Edmund Perlas, who wrote the endearing “Only For You,” and Hale’s Roll Martinez in the alt-pop flavored “Kapit.”

Picking up the tempo past the midpoint, “TGU” carries with it a triple-treat of modern, upbeat pop tunes starting with the subtle electro flavored “Sabi Mo Sa Akin” (written by Mark Villar). Previous collaborator and beats meister Jumbo “Bojam” DeBelen whipped up a smorgasbord of beats with Nica Del Rosario and Emmanuel Sambyan in the dubstep fringed “Tala.” Closing the album on a high note, is the Thyro Alfaro-Yumi Lacsaman track “Misteryo.”

“The Great Unknown” is produced by Civ Fontanilla and Sarah Geronimo and is released by Viva Records. The album was released last December 4, 2015 and is exclusively available on all Odyssey Music and Video and Odyssey Next stores. “The Great Unknown” by Sarah Geronimo is likewise available iTunes and can be listened to on music services such as Spotify, Deezer, Guvera and other music services.