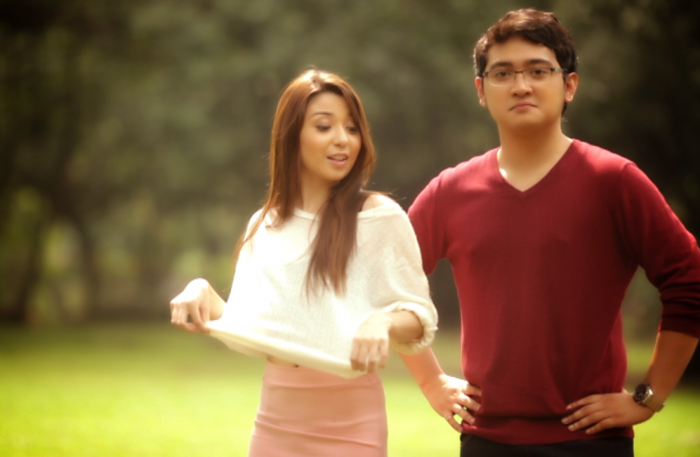 YouTube sensation Donnalyn Bartolome is making sure 2014 is the year she establishes herself as a legitimate pop act. It’s all about moving forward for this young music artist, and after jumping from the YouTube screen onto the music scene, Donnalyn has got another song to show for her efforts.

A succesful debut for her “Kakaibabe” single wherein she sings and raps definitely needs a bigger follow-up and that kicker comes via her new single entitled “Huwag Siya.” And to keep more things interesting this time out, Donnalyn brings with her Fliptop rap champ and fellow YT sensation, Shehyee.

In Donnalyn’s new music video for “Huwag Siya,” she and Shehyee try to one-up the other for the affection of the same girl. DB’s has taken the tomboy role for this one and she’s pouring on the charm to get one over Shehyee, who himself puts up a stiff fight. It’s all done in jest though and ultimately boils down to the tune. “Huwag Siya” is infectious and is just the right, easygoing vehicle for these two rappers to trade verses on. The lyrics are not your usual too, but it’s something we all know is commplace. It’s definitely refreshing to see today’s newly minted pop acts like Donnalyn and Shehyee tackle on the less-trodded on topics and sound modern at the same time.

This is not the first time these two acts have worked together. DB’s appeared at Shehyee’s music video for “Trip Lang,” and now he’s doing DB a favor back for “Huwag Siya.”

With her second single/music video officially launched, Donnalyn is doing the necessary activities to promote “Huwag Siya.” This includes a series of mallshows that will kick off with a proper launch this Sunday, November 9 at SM Marikina. Then it’s off to other SM Supermall branches at Novaliches on November 15, SM Masinag on November 23, and at the newly opened Fisher Mall in Quezon avenue on November 30. There’s also one at Lucky China Town on December 5, before wrapping it up for the year on December 6, at SM Rosario.

To find out more about this tour, visit the Viva Records FB and Twitter accounts for more information.

In the meatime check out the official music video for “Huwag Siya” and more Donnalyn related videos at vivamusicgroup1 on YouTube and other updates at vivarecords on Facebook. Donnalyn Bartolome’s debut album is under Flipmusic Records and distributed by Viva Records.